Kennedy plays almost every measure on this recording himself, utilizing electric and acoustic guitars, ukulele, electric sitar, mandolin, 5 string banjo, bass, B3, and drums. He has some accompaniment on one track, “Seven Come Eleven,” playing along with Danny Gatton (duet guitar) and John Previti (bass). When I look at the list of instruments being played by Kennedy, I can’t help but wonder if there is a stringed instrument out there that he has not yet mastered. If there is, I’d believe that he could have it wrangled very quickly. 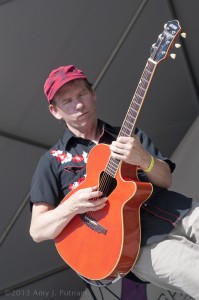 The other aspect that I appreciate about this release is that it brings new exposure to some perhaps lesser known gems from music history. According to the album’s web page, the intentional focus of this collection is the electric guitar. Hitting the musical landscape in the 1930s, the electric guitar was a less than celebrated instrument in the mainstream until the 1960s when the Beatles came along and changed the way rock music was played and received. So, according to Kennedy, what marked those decades in between? Who were some of the lead players and innovators? Kennedy starts to answer those questions with his selection of songs here.  The composers Kennedy has chosen to highlight in this album include Speedy West, Merle Travis, Jerry Reed Hubbard, George Gershwin, Morgan Lewis, Chet Atkins, Django Reinhardt and Stéphane Grapelli, Charlie Christian and Bennie Goodman, Earle Hagen, and Richard Rodgers. Adding perhaps an unexpected coda to the demonstration of the versatility of electric guitar, Kennedy closes out the album with Bach’s “Jesu, Joy of Man’s Desiring.”

Kennedy’s style is so well developed that he also has two original compositions included on this collection, “Baby Catt’s Blues” and “Django’s Train,” which fit in seamlessly with the other tracks. The overall result is a beautiful collection of music which will appeal to anyone who appreciates a well played guitar. The listener gets that in delightful abundance in this release. Check it out!